TL;DR: No – it’s just SQL Profiler not telling you the entire truth.

In evaluating Entity Framework 4.1 (aka EF Code-First or “Magic Unicorn” Edition) I’ve been keeping an eye on what SQL it’s actually executing against SQL Server (how’s that for a leaky abstraction?). Here I saw something slightly worrying which was that it appeared that the client was logging in, executing a query and then logging out as seemingly indicated by the Audit Login and Audit Logout events: 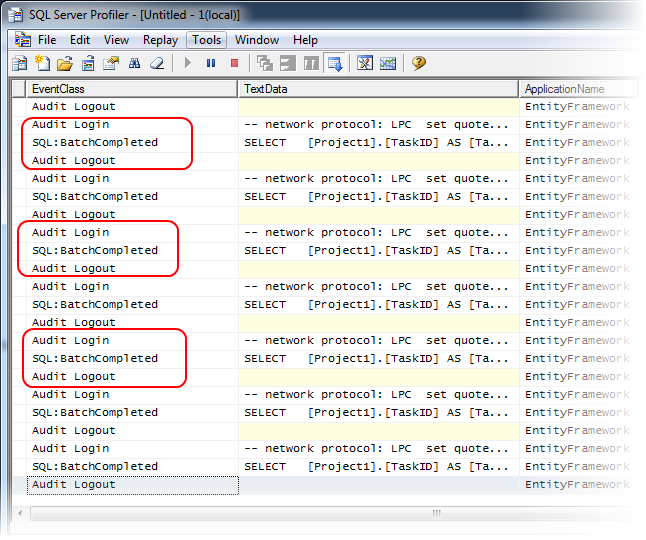 The same thing happens without EF using basic SqlCommand queries. To tell you the truth I’d noticed this a while ago but hadn’t got round to investigating.

Rather than assume that connection pooling was broken on my machine, I had a hunch that SQL Profiler was somewhat misrepresenting what was really going on.

Indeed Markus Erickson on StackOverflow mentions the EventSubClass column you can add to SQL Profiler’s output to see if those Audit Logon/Logout events are actually connections being pulled from the pool or fresh connections.

Here’s how you show the EventSubClass column in SQL Profiler (I’m running SQL 2005 on this machine, I can only assume it’s similar on 2008): 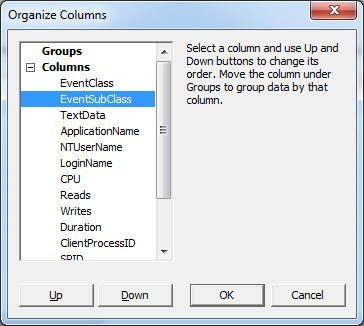 Now you can re-run your trace and hopefully be reassured that connection pooling after all is functioning correctly!

View all posts by Duncan Smart