I seemed to have everything in place but came up against the following error in a yellow screen of death: 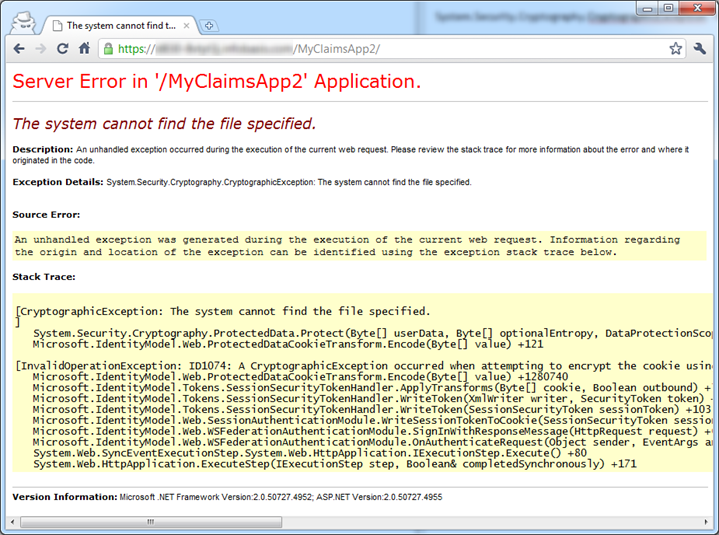 Looking at the stack trace it seems that Data Protection API (DPAPI which in .NET is exposed as System.Security.Cryptography.ProtectedData) is being used to encrypt data. A common use of DPAPI is to do encryption without you having to worry about key management: you leave it to Windows to worry about where the keys are stored. Those keys are typically buried in your user profile/registry somewhere – so it seemed odd DPAPI was being used here at all – the DPAPI keys would need to be part of the App Pool user account profile/registry.

Sure enough WIF was using DPAPI to encrypt a token, but DPAPI was complaining it couldn’t get to the keys because there was no user profile for the App Pool identity, which in this case Environment.UserDomainName/UserName told me was “IIS APPPOOLDefaultAppPool” – and there was no such user profile directory under C:Users.

So sure enough in IIS, in the advanced settings for the App Pool, Load User Profile was false, and setting it to true creates and loads user profile (a “DefaultAppPool” profile directory appeared in C:Users), and the application worked:

Typically WIF tutorials use the ASP.NET Web Sites, which use Cassini for testing, which runs under the current user identity and therefore a user profile with its DPAPI keys will be loaded – which is why if you use the standard run throughs/demos you don’t come up against this issue. But if you run as a Web Application under “real” IIS, this is when you may hit this problem.

It’s also debatable whether the use of DPAPI here is at all sensible. In a web farm environment the DPAPI keys for the App Pool identities across servers will be different, so if you don’t have sticky sessions enabled on your load balancer you run the risk of such federated logins not working 100% of the time. This issue is mentioned by Matias Woloski in the Geneva forums.

Another case of bad defaults all round.

View all posts by Duncan Smart